For sharing and informational purposes only on this platform.

What Will It Take for All Sheeple to Wake Up

What Will It Take for All Sheeple to Wake Up to the fact that a Master Plan has been underway to depopulate first Western Democracies and then all continents?

There is no Pandemic or Disease that is going to kill all of us, that was the Lie and Cover and so many are still buying into this pure Bull Shit Lie which is from Satan and all his very wealthy powerful ruling class Satanist’s Biden included that have no use for any of us and want us disposed of; and that is what this is all about People! They’re not out to protect you as you’ve been told and this COVID-19 with normal cold/flu treatment has had a 99.98% survival rate which by itself spells out that no extraordinary measures were or are required!

There hasn’t been anything so extraordinary circulating the globe other than typical cold or flu type viruses but the lock-downs and masks with all the other over the top phony protocols have slowed herd immunity from being established while improper treatment has been pushed on people, like ventilators creating positive pressure or irritation on delicate bronchial and lung tissues, that can easily make any respiratory inflammation and congestion much worse pushing the sick person into double pneumonia and respiratory failure; this being a very difficult balancing act to me akin to playing Russian Roulette with the lungs!

“The resolution to the problem seems to be simple; all we need to do is cast the lung at risk of developing ARDS to keep it open and stable in the event of impending lung injury. However, as ARDS progresses, vascular permeability will increase and edema fluid entering the alveolus will begin to deactivate surfactant making the lung increasingly unstable (Fig. 1). Thus the cast must be adjusted as lung pathophysiology advances or diminishes, to maintain homogeneous ventilation. Therefore, the clinician must understand how to apply the proper “dose”of the preemptive mechanical breath.” https://emcrit.org/wp-content/uploads/2016/12/broken-lung.pdf

Are people getting a clue now if they weren’t listening to the brave experts and others who since last year provided the real facts and truth about what is really going on like Dr. Bhakdi in Germany or Professor Ioannidis at Stamford in California along with another great expert Professor Bishara in Israel,all of them offering the whole Truth; over all the lying in the MSM and from our government officials like Fauci! All this while conventional treatments were and are available like the Ivermectin which is cheap, and saves people having severe cases of SARS2 COVID-19; but that treatment like in this case with the French doctor is being banned in many locations!

Its going to take people fighting back every way they legally can, but, they are coming for all of us and when push comes to shove or jab for those of us who will never except this tyranny or Nazi control it will be a matter of fighting back no holds barred! Many people have already stated throughout America that they will go down fighting if any Nazi Marxist government tries forcing anything upon them!

I myself will keep doing as I do now and have been since the onset; keep praying to Jesus Christ daily and live a sensible lifestyle of maintaining my resistance and immune system by getting proper nutrition and rest to let nature that God provided in the form of our amazing immune system deal with establishing herd immunity just like we always have when cold/flu season comes, and we perhaps don’t even catch a cold or if we do it fades quickly. I used to have that work for me even when working 15 hour days, but just did all the right health things along with keeping a positive mind over matter outlook, that I have faith in my natural defenses that God gave to us all and my faith and good living got me by all the time; no flu shots or anything like that!

God bless you and yours!

We’ve Been Had; the Global Hoax 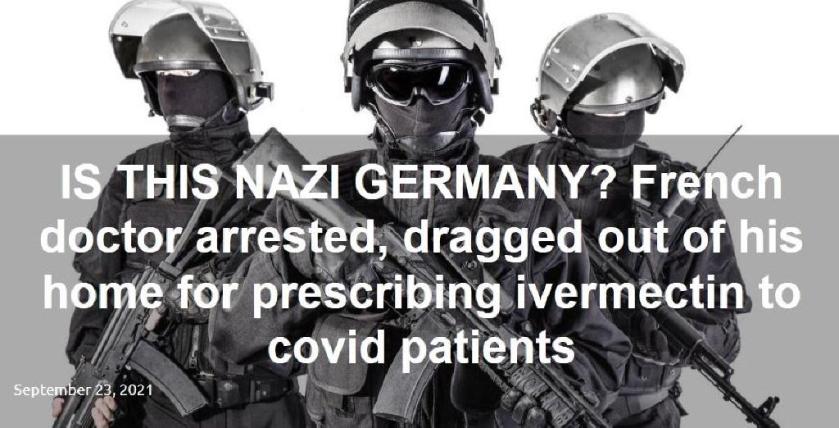 (Natural News)
For the “crime” of prescribing ivermectin to his patients, a French doctor by the name of Jean-Paul Théron was arrested at his home and dragged out by police officers working on behalf of the medical police state.

Footage – watch below – shows a mob of masked jackboots forcefully pulling Théron out of the building against his will as his neighbors and other onlookers scream in horror at the tyranny taking place:

Théron’s arrest happened at the behest of the Council of the Order of Physicians, which filed a complaint against him for saving lives with ivermectin rather than ending lives with “vaccines.”

The incident occurred on September 19 right as Théron was in the middle of consulting with a patient. He reportedly received three other complaints as well from other Branch Covidian entities that accused him of malpractice for administering ivermectin.

A former public health doctor who retired in 2020, Théron currently practices medicine non-contracted, meaning he is independent. He adopted the Wuhan coronavirus (Covid-19) treatment protocol of Dr. Didier Raoult, who is also being persecuted for helping Chinese Virus patients heal.

Dr. Raoult’s protocol involves the use of ivermectin, zinc and a drug called dazitromicin. Many people have been cured of the Wuhan Flu using this approach, including many of Théron’s patients.
The West is being exterminated by the Branch Covidians

Because ivermectin, zinc and other safe and inexpensive remedies cut into the profits and depopulation agenda of the medical deep state, doctors who administer them increasingly face persecution from police officers who are just obeying orders.

“Backing the blue,” in other words, now means supporting full-scale medical fascism in whatever shape it takes form. In France, that looks like licensed medical doctors being dragged from their homes like actual criminals and humiliated in the streets.

In the United States, it currently looks like doctors being threatened with having their medical licenses revoked should they be caught prescribing ivermectin to their covid patients.

In India, on the other hand, ivermectin is widely administered and even handed out for free by the government. Almost nobody is dying there, and almost nobody is taking the “vaccines.”

Unlike much of the rest of the world, India is not seeing mass hospitalizations or deaths from the Chinese Virus because ivermectin is the norm there and Fauci Flu injections are not.

There is a direct correlation between high vaccine compliance and high rates of disease and death. Conversely, low vaccine compliance means a healthier population, especially when other remedies like ivermectin are used in place of the shots.

This is why Théron had to be stopped. He was helping too many people to recover from Chinese Germs and that is not the point of the plandemic. The real goal is to depopulate primarily the West, followed by everyone else once the “superpower” nations are subdued under the heavy boot of medical fascism.

“If you don’t think we are at a tipping point worldwide, then you need to wake up,” wrote one commenter at Citizen Free Press. “Globalists / Marxists are taking over while everyone sits back in denial.”

“The big reset is coming,” wrote another. “Covid, voter fraud, and worldwide ruling by decree is just the beginning.”

Another called on the “Living God” to judge any and all who seek to enslave and harm people for trying to do what is right to help others and fight evil and injustice.

“May the Lord Almighty vindicate his righteousness and rebuke those who serve the dark Lord Satan,” this person added.

Covidism really is a religion of mass genocide. To learn more, visit ChemicalViolence.com.

IS THIS NAZI GERMANY? French doctor arrested, dragged out of his home for prescribing ivermectin to covid patients

This article was originally published by Naturalnews.com. Read the original article here.

“All content posted on this site is commentary or opinion and is protected under Free Speech. lawrencemorra.com Zero Lift-Off is not responsible for the content written by contributing authors in this report. The information on this site is provided for educational and entertainment purposes only. It is not intended as a substitute for professional advice of any kind. lawrencemorra.com assumes no responsibility for the use or misuse of this material. Your use of this website indicates your agreement to these terms and those published on this site. All trademarks, registered trademarks and servicemarks mentioned on this site are the property of their respective owners.”