That was the exchange that took place on Calvary 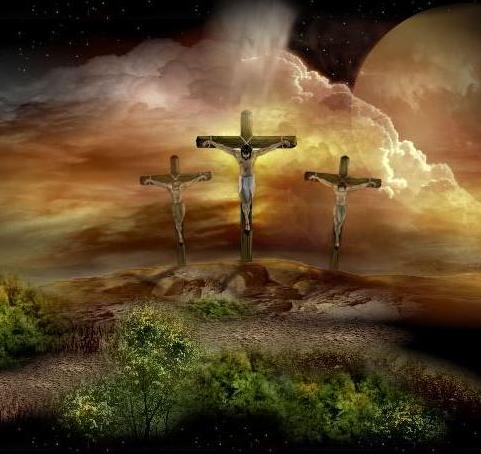 As my father told me when I was a boy, “strengthen your faith,” and then as I discovered through my own experiences and learning to understand the truth contained in the Holy Scriptures as being God’s spoken word to us in which He our heavenly Father is showing us just how to do that!

Then when I was older I couldn’t think of any better place to put myself than on that cross of the sinner next to our Savior on His cross.  He our Redeemer and Most High Lord Jesus Christ the Savior put Himself there next to us as we die with our human imperfections all of us laden with sin which brings nothing to us but death.  He our Savior is there next to us saying trust Me I’m here to save you from yourself and all of your weakness but ultimately your enemy death, out of My abundant love and mercy; because you are worth saving if you will just believe in Me and by so doing express your love for your heavenly Father by abiding in Me the Savior by your faith.  Whenever I read about this exchange on Calvary or watch the masterpiece film “The Passion of The Christ” I can’t help but cry like a child nearly throughout the depiction of our Lord’s journey to that one most significant moment in the history of this world!  But, so powerful is the message when the film arrives at that point in Christ’s journey just before His Last breath when He declares, “Father, into thy hands I commend my spirit,” then His final words and to me so telling, “it is finished.”  That is the moment He our Savior on that cross for us gave up His life here willingly in the flesh, and then conquered death in order to give us everlasting Life and not Death; I sob like a child whenever I see this part of the film!  Because I know I’m a lowly weak sinful human being, even though I’m no criminal or despot I’m no better than that dying criminal being crucified next to our Savior was, and I deserve what Jesus was given by this corrupted sinful world that is falling away!

That was the exchange that took place on Calvary, He our heavenly Father in the flesh Jesus Christ said I will take your place and all the suffering and punishment each of you deserve so that you will be spared death and separation from the Father in Paradise! And, all we have to do is accept His gift to us by believing and trusting in Him by our FAITH!  Amen.

Have worked in creative and news visual media as a photographer or cameraman and this POV has given me a better insight or view of the world. The Cameraman's POV. His Perspective on many things. Email: lmor3@aol.com View all posts by Lawrence Morra

7 thoughts on “Both Fathers Told Me”