“we should instead be inspired by their symbol of hope, peace and the Holy Spirit” 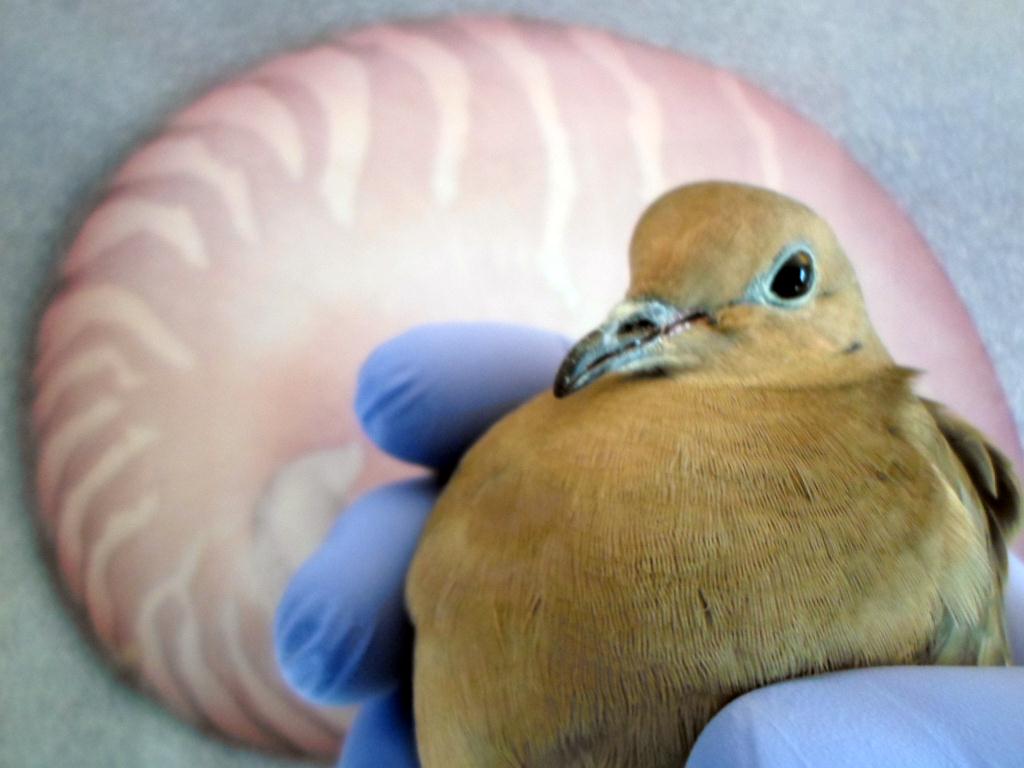 Yesterday afternoon just as the sun was setting I was doing some typing when I thought I heard a sound just outside of the house but it was so faint and quick I continued on until I needed to get another bowl of my homemade chicken soup I had just made earlier.  About a half hour later I was in the kitchen straightening up and saw that I needed to shut off a water drip I started at the bird bath out back in the morning because the temperature had gotten well above freezing so I wanted to provide the birds with that opportunity for the day after the recent snowstorm and icy conditions the previous day.  I took care of that and turned to head back in through the garage when I saw a pane of glass was smashed out of the overhead garage door and immediately upon going over to see what had happened I saw shards of glass all over the floor and on the trunk lid of an old antique car I have on that side of the garage.  Looking further even though it was just about dark now I saw a dove lying on the floor just below the rear of the car completely motionless with the broken glass all around it, and realizing what amount of force it took to propel through that window and birds being so delicate boned it was a forgone conclusion it was dead.

So I turned to go back into the house to get some duct tape to cover over that window area until I could buy a piece of glass at the hardware and repair it.  I no sooner got out there again and began taking long lengths of tape, applying them like a sort of bandage over the opening when my foot almost stepped on the dead bird but in the nick of time I felt my foot that very split second coming down on something other than the flat concrete floor when simultaneously there was a sudden flurry of wings flapping and the thought to be dead bird was trying to flee from my foot and got over to the other side of the garage!   I walked over to the dove and promptly spoke gently to it and scooped it up in my hands, and to my amazement the bird was alive and showed no signs of any major feathers missing but just some of its smaller downy ones had gotten torn away and surprisingly there were no bloody wounds either!  More amazing its neck had not broken or one of its wings which should have snapped like a twig in the impact.  Its eyes blinked as I spoke softly to it and said you hang on now you poor little baby, I’m going to bring you in the house and give you a place to rest and recuperate until tomorrow!  I had rescued a pigeon in the area last year so I had bought a large Tupperware storage container and made air vent holes in it which was actually stored away in the garage, so I went over to the shelf and grabbed it with one hand while I kept the bird with my other hand close to my chest and started to head into the house.  Once inside where it was well lit I could see the bird looked totally intact and so I placed some newspaper in the container for catching its droppings.  I put the bird in closing the lid and setting the temporary home in a quiet area of the house.

This bird had really gone through an unbelievable ordeal most likely with a hawk in hot pursuit when its fight or flight instinct kicked in and it flew like a bat out of hell to get away in such a panic and as well as it being dimmer light out there so late in the day, while putting every bit of its energy into escaping the deadly hawk, it must have just turned the wrong way and slammed itself into that glass window pane going completely through it and onto the car in the garage which took a lot of force, enough in fact that in my estimation from my science knowledge of physics it should have at least broken its neck not to mention the multiple shards of glass all over the place, with a high probability that at least one of them should have ripped or gashed and even impaled the poor unfortunate bird!  But, I have to say “miraculously” the little dove is looking like it has a good shot at beating all of the odds with my intervention.  So, calling it a day I headed off to bed and hoped for the best saying a prayer for the “mourning dove;” wondering what “morning” would bring. 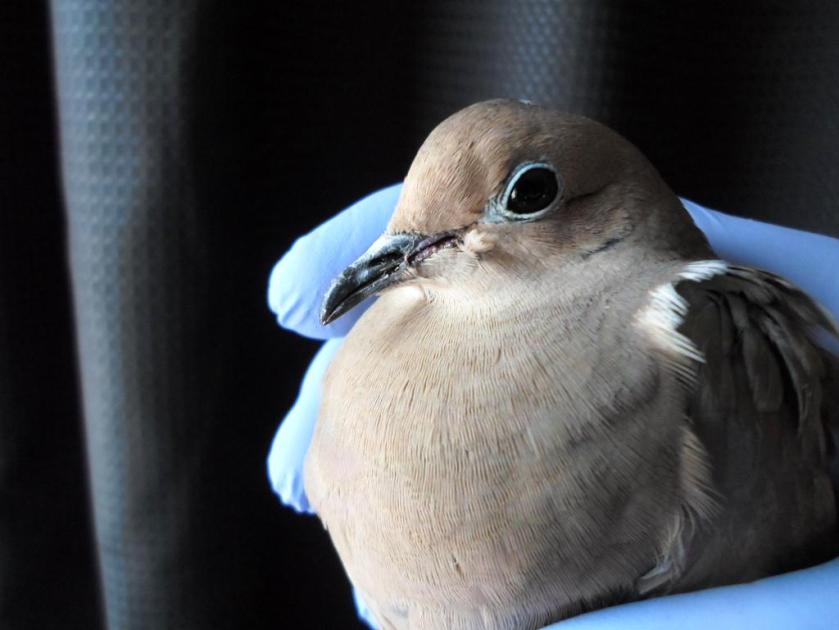 This morning after a quiet rest all night I checked in on our little fine feathered friend and it was completely alert and a bit feisty, so I gave it a tray with water and another with bird seeds that I keep around to feed the many birds that come to visit each day as long as I’m able to do it.  All day the bird was calm in its protective little house I provided and I had checked in a few times again noticing how the dove was walking a little and ate some seed.  The condition of the bird was amazing to say the least and it did seem to be fully functional as it occasionally was flapping its wings!  So as the afternoon progressed and the daylight was fading fast I decided to chance a trial with the dove to see if it was in a big hurry to get back to its normal life, so we headed outside.  I placed our fine feathered friend down on the ground and it hesitated a few seconds but then started flapping its wings again as it did earlier in its temporary home.  This time it got airborne and flew about thirty feet down range but only a couple of feet off the ground, so it just didn’t have the power or strength to fly high into the sky at this point and the risk paid off because now we know the dove can fly but will need some serious recuperation and time to overcome its most likely sore and bruised body or muscles; but the prognosis is good. 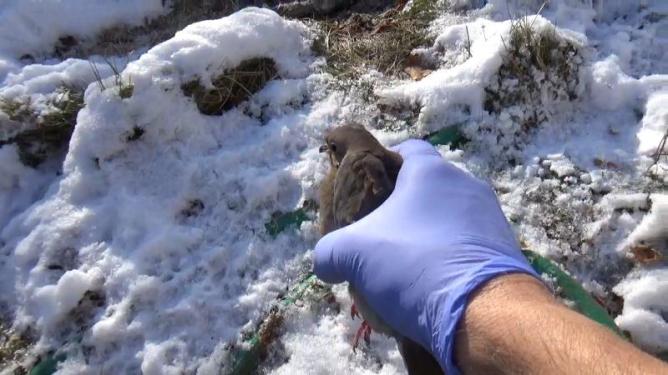 Meanwhile here is some very interesting background information about these special little birds.  I know this bird came to me for a reason!

An Examination of Mourning Dove Symbolism

“By virtue of their melancholy call, mourning doves have been fittingly named. The mourning dove call is a distinctive “wooo-oo-oo-oo” sound which may evoke a feeling of grief over the loss of a dearly beloved. But far from representing death, mourning dove symbolism can give us optimism with its spirituality. Beyond their sorrowful song is a message of life, hope, renewal and peace.

This beautiful bird (Zenaidura macroura) is the most common species of dove found in North America. Because they are plentiful, they are considered the most popular game bird – hunted both for meat and sport.

A dove is in fact a small pigeon. There is no technical difference between a dove and a pigeon save that doves are depicted to have pointed tails and move in a more graceful manner. Grayish-brown in color, Mourning Doves drink water by sucking – a remarkable accomplishment for birds.

Another remarkable feature is their monogamous nature. Mates typically stick together for the long run and become very devoted parents.
3 Key Representations

Among all the birds, the mourning dove is among the most celebrated bird – gracing sacred scripture (The Holy Bible under the Christian Faith) and appearing as a recurring icon in our lives. What does this bird symbolize? Below are the traditional and primary concepts it epitomizes:

A symbol of the Holy Spirit

The Holy Spirit, one of the figures of the Holy Trinity (The Christian Doctrine advancing the belief that God exists in three persons: Father, Son and Spirit) is depicted as a dove in the baptism of Jesus. According to the Bible, when Jesus emerged from the water, a dove from heaven descended upon him. Baptism is a Christian Sacrament of spiritual rebirth by which we are “cleansed” of our “original sin,” and the Holy Spirit places us in permanent union in Christ, and makes us a formal member of the Christian Community.

A symbol of Hope

In the Noah’s Ark story, God decided to create a big flood to wipe out all the people on earth, except for Noah and his family. After forty days and forty nights, Noah released a raven to look for dry land. When the raven returned without success, a dove was then released. The dove, thereafter, flew back triumphantly with an olive leaf. Noah was pleased. It brought reassurance that trees were growing on dry land – a certain sign of life! The dove stood, therefore for new beginnings, great expectations and deliverance.

A symbol of Peace

Although it is a white dove that typically represents peace and safety, mourning doves may also represent the same. The states of Wisconsin and Michigan regard the mourning dove as their official state symbol of peace. Pablo Picasso, the famous Spanish artist, when commissioned to design the logo for the World Peace Congress in 1949, drew a dove entitled “Dove of Peace-Blue.” It is because of their simple and maternal nature that doves have become a symbol of solidarity and concord among nations.

Thus, when looking at mourning dove symbolism, we can see that instead of recognizing them for their melancholy call, we should instead be inspired by their symbol of hope, peace and the Holy Spirit.”

4 thoughts on “The Miracle Mourning Dove”