Reblog:
Zero Lift-Off by Lawrence Morra
“Love of Money and Evil go Hand in Hand”
Do you want to see what abhorrent evil looks like and what one of its human faces looks like? All you need to do is check this perfect story explanation of how it goes down even now as we communicate in many locales. In this case the human abhorrent evil has a human face belonging to a man named Joe Biden. He smiles but has a giant anchor surgically attacked or prenatally fused to his body and he’s yet to discover also his soul; doomed forever; done for and kaput! As Holy Scripture tells us, “the love of money is the root of all evil.” * — 1 Timothy 6:10
He is one of the Democrat Fascist Party that screamed how Trump was in Collusion with first Russia and then Ukraine! All along it’s been Biden and the Democrats that have backdoor deals!
Where the heart is placed and to what it’s preoccupied with, is where it belongs and will be attached forever; making one’s very soul to which it is possessed.
Lawrence Morra

Ukrainian officials on Saturday announced they intercepted a $6 million bribe attempt to stop a criminal investigation into the president of Burisma, the natural-gas company at the center of President Trump’s impeachment investigation.

At a news conference, the officials displayed large bags of seized U.S. currency.

Ukraine’s anti-corruption prosecutor Nazar Kholodnitsky said former Vice President Joe Biden’s son Hunter, who once held a board seat, was not complicit in the bribe attempt. 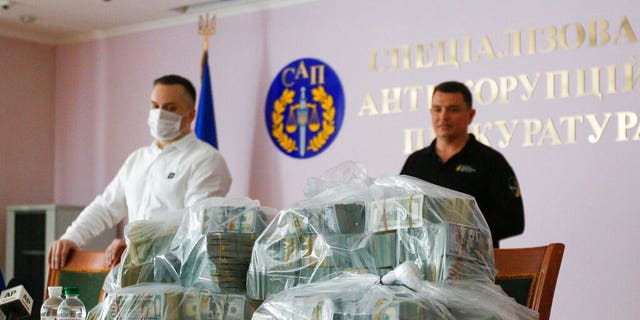 Kholodnitsky and the head of the national anti-corruption bureau, Artem Sytnik, said the bribe was intended to encourage their offices to halt a probe of Mykola Zlochevsky, the head of Burisma and a former minister of ecology. Zlochevsky was accused of using his ministerial…