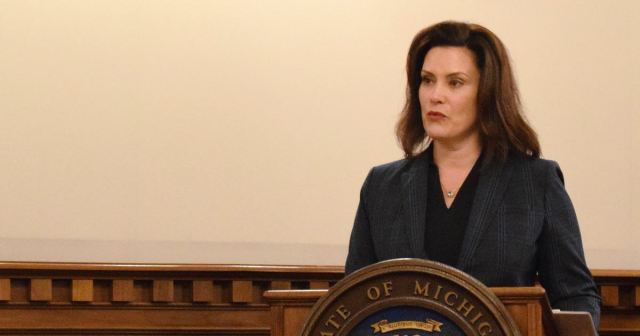 For informational sharing purposes only on tis platform.

The Nerve of this Left Wing Radical!  While human beings have suffered and paid the ultimate cost of her unsound and wreak-less self-serving policy; she celebrates?  There is only one way to classify this, and that is DIABOLICAL!   She lives a LIE!

Actions have consequences and as my daddy told me when I was a kid; nobody gets away with anything in this world!

“There will be weeping and gnashing of teeth, for you will see Abraham, Isaac, Jacob, and all the prophets in the Kingdom of God, but you will be thrown out.” Luke 13:28

The far-left loves nothing more than to pretend their failures are actually a success.

They’ll twist the truth at every turn to avoid taking any blame for their actions and policies.

That’s why this Democrat Governor, whose state has the nation’s highest COVID rate, recently received an award for her COVID response.

The state of Michigan has been ravaged by COVID in recent months.

While states like Florida and Texas, which have always had far less stringent restrictions, have thrived, Michigan has suffered under the leadership of Democrat Governor Gretchen Whitmer.

Put simply, no Governor – not even New York’s Andrew Cuomo – has handled COVID worse than Whitmer.

Her policies directly resulted in the deaths of thousands of elderly Michiganders in nursing homes, creating her own nursing home scandal in the process.

Despite what experts call “improvements,” Michigan still has the nation’s highest COVID rate with 38 cases per 100,000 residents.

Her decision to institute the strictest lockdowns in the nation resulted in the complete destruction of Michigan’s economy, and she’s even gone out of her way to violate her own restrictions multiple times.

Yet, despite all of those issues, the John F. Kennedy Library Foundation decided to award Whitmer their “Profile in Courage” award for her response to COVID.

To make matters even worse, the JFK Library Foundation created the award for the sole purpose of giving it to her and others who have been on the “front lines of the COVID-19 pandemic that were going above and beyond their everyday responsibilities to help those in their communities.”

They determined that Whitmer somehow fit that criteria despite all of the aforementioned issues she created, noting that her “leadership” and uncompromising lockdowns during the pandemic – which again, is still ravaging Michigan – made her worthy of the honor.

“When Michigan’s first cases of COVID-19 were identified in early March 2020, Governor Gretchen Whitmer invoked emergency powers in a bid to contain the spread of the virus and save lives, issuing early, controversial orders to close schools and businesses, mandate mask wearing, and ban large gatherings, among other measures,” the foundation said in a statement.

“While her leadership earned praise from many, she also faced sustained, vocal backlash over stay-at-home rules that remained in place as COVID-19 cases in Michigan continued to rise during the spring,” the statement continued. “Protests over Whitmer’s pandemic response became increasingly threatening, with armed demonstrators surrounding and at one point storming the state capitol to demand an end to stay-at-home orders. In October, thirteen men were charged with a June 2020 plot to kidnap Whitmer. The men were said to be motivated at least in part by anger and resentment over pandemic restrictions. Despite violent threats against her life, Whitmer did not back down. She stayed focused on following the science and listening to public health experts to get the pandemic under control and start rebuilding Michigan’s economy.”

It is rather hilarious that the foundation claimed Whitmer got “the pandemic under control” while her state still leads the nation in COVID cases, and also claims that she started “rebuilding Michigan’s economy,” when of course, her policies were what destroyed the state’s economy in the first place.

Former Michigan Senate candidate John James may have put it best when he said that the idea Whitmer would receive an award for her COVID response was “tone deaf.”

“I actually understand that this is one of many awards that our governor has been winning recently. I heard that she’s recently won two job creator jobs awards in Ohio and Indiana and the number one real estate developer in Florida,” James joked on FOX News.

“And when you talk about profiles in courage, people who will put themselves in harm’s way to do the right thing versus a politician who maybe is under draconian orders that have sacrificed livelihoods and lives, it looks politically motivated at worst, and tone-deaf at best,” James continued. “There are a lot of people who are struggling around Michigan.”

And quite frankly, John James couldn’t be more correct.

The entire purpose of this award was very obviously politically motivated.

A far-left organization giving a Democrat an award for their failures is a move right out of the far-left playbook.

The far-left is determined to white wash the truth about COVID, and by giving one another awards, it allows them to pretend that all of the struggles the American people are going through aren’t a direct result of Democrat policies.

Governor Gretchen Whitmer isn’t the first Democrat to receive an award for her failures, and she certainly won’t be the last.

Stay tuned to Right News Wire for any updates to this ongoing story.