China is setting the stage for the next major war
By Robert Arvay
Friends I say this wishing it were just imagination but we are in a world of hurt like never before while way off beyond our Western horizon world conflict is brewing! China is a Communist led nation of about 2.2 Billion people and that makes it a burdened corrupt nation that wants more power, resources and control over anyone and any nation that it can acquire! The pandemic demonstrates clearly just how unpredictable and dangerous China’s Communist Party is; and we are going to have to deal with them in a not very straightforward manner; and war is the most likely outcome, that is of course short of any miracle taking place to prevent it.
Lawrence Morra 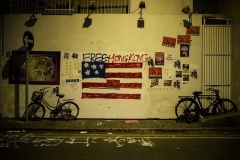 Graffiti on a wall in Hong Kong. (Photo by Anthony Wallace/AFP via Getty Images)

(CNSNews.com) – Secretary of State Mike Pompeo’s determination to Congress Wednesday that Hong Kong is no longer “sufficiently autonomous” from China to merit U.S. trade privileges paves the way for President Trump to take punitive steps against Beijing at a time when bilateral relations have soured dramatically over the coronavirus pandemic.

In response to China’s plan to impose controversial security legislation on Hong Kong, Pompeo said Wednesday that “no reasonable person can assert today that Hong Kong maintains a high degree of autonomy from China, given facts on the ground.”

He therefore informed Congress “that Hong Kong does not continue to warrant treatment under United States laws in the same manner as U.S. laws were applied to Hong Kong before July 1997.”

That benchmark points back to legislation passed…