Informational sharing purposes only on this platform.

Who the heck does this junior peon congresswoman think she is to even open her lying conniving fly trap??? What brain power and world experience does this twit bar tender from the Bronx New York who obviously hates America and its core patriotic values; could possibly have, to think she should say boo about this monstrous caldron of potential hellfire in a place that never had real peace; having been infested with blatant terrorists sanctioned by a State Terror Sponsor the evil empire of Iran, which has been calling for the destruction of Israel far too long already; while they continue to supply terrorists with munitions and all other strategic support needed to attack innocent Jewish citizens!!!  This AOC and the whole Punk Squad are way past due being given the boot and a good swift kick out of our government and only if they are lucky enough not to end up in prison where they belong!  AOC you have lied to this county and its people continually and all of you are nothing but trouble!  Bad actions or behavior have consequences and they are coming; because there still are some good patriotic government officials and citizens that will see to it! 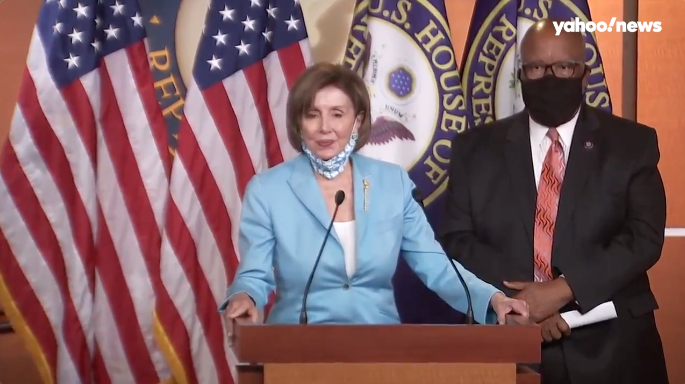 Scroll back up to restore default view.

Reps. Alexandria Ocasio-Cortez, D-N.Y., and Rashida Tlaib, D-Mich., announced Wednesday that they are introducing a House resolution to block an arms sale to Israel amid continued violence in the region.

After the Washington Post reported that the Biden administration had approved a $735 million arms deal on Monday, there were multiple reports that Democratic members of the House Foreign Affairs Committee planned to send a letter to the administration requesting a delay in the sale. But on Tuesday, Democratic Majority Leader Steny Hoyer said there would be no such request.

The latest violence between Hamas, an Islamist group that controls the Gaza Strip, and Israel erupted earlier this month. Gaza’s health ministry says 227 Palestinians have been killed so far in the conflict; Israel says the Hamas rockets have killed 12 of its citizens.

Over the weekend, Israeli forces destroyed a building in Gaza that housed the offices of the Associated Press. The Israeli government says the building was also used by Hamas.

The renewed clashes were precipitated by a police raid at Jerusalem’s Al-Aqsa Mosque on April 13, the first night of the Muslim holy month of Ramadan, and the threatened evictions of Palestinians from neighborhoods in Jerusalem.

“For decades, the U.S. has sold billions of dollars in weaponry to Israel without ever requiring them to respect basic Palestinian rights. In so doing, we have directly contributed to the death, displacement and disenfranchisement of millions,” Ocasio-Cortez said in a statement Wednesday.

“At a time when so many, including President Biden, support a ceasefire, we should not be sending ‘direct attack’ weaponry to [Israeli] Prime Minister Netanyahu to prolong this violence.”

Tlaib, who is of Palestinian descent and has family in the region, said in her own statement, “Approving this sale now, while failing to even try to use it as leverage for a ceasefire, sends a clear message to the world — the U.S. is not interested in peace, and does not care about the human rights and lives of Palestinians.” Tlaib spoke with Biden at a Detroit-area airport on Tuesday during his trip to the state.

According to the congresswoman’s office, Tlaib told the president, “Palestinian human rights are not a bargaining chip and must be protected, not negotiated.”

Biden addressed Tlaib during his remarks in Michigan after the conversation, saying that he admired her and was praying for her grandmother, a resident of the West Bank.

“You’re a fighter,” he said of Tlaib. “And, God, thank you for being a fighter.”

According to the Post report, most of the sale was of “Joint Direct Attack Munitions, or JDAMs — kits that transform so-called ‘dumb’ bombs into precision-guided missiles.” The resolution to block the sale is also being introduced by Rep. Mark Pocan, D-Wis., former co-chair of the Congressional Progressive Caucus. It has six additional sponsors, all Democrats.

The fighting between Hamas and Israel has put the Biden administration in an awkward position, with progressives in the party criticizing U.S. support for the Israelis and Republicans insisting that Democrats are tacitly supporting Hamas.

The White House said Wednesday that Biden had spoken to Netanyahu and conveyed that he expected a “significant deescalation today on the path to ceasefire.” Shortly after his conversation with the president, Netanyahu said he was “determined to continue this operation until its aim is met” and that he “greatly appreciates the support of the American president.”

When White House press secretary Jen Psaki was asked Monday whether Biden was “giving too much credence to Israel in this situation,” she said she didn’t think “it would be constructive to put any labels on it.”

“We share an objective of deescalating the situation on the ground, of bringing an end to the conflict,” Psaki said.