“We like watching the birds, rabbits, and other critters. We maintain our land as a wildlife sanctuary” 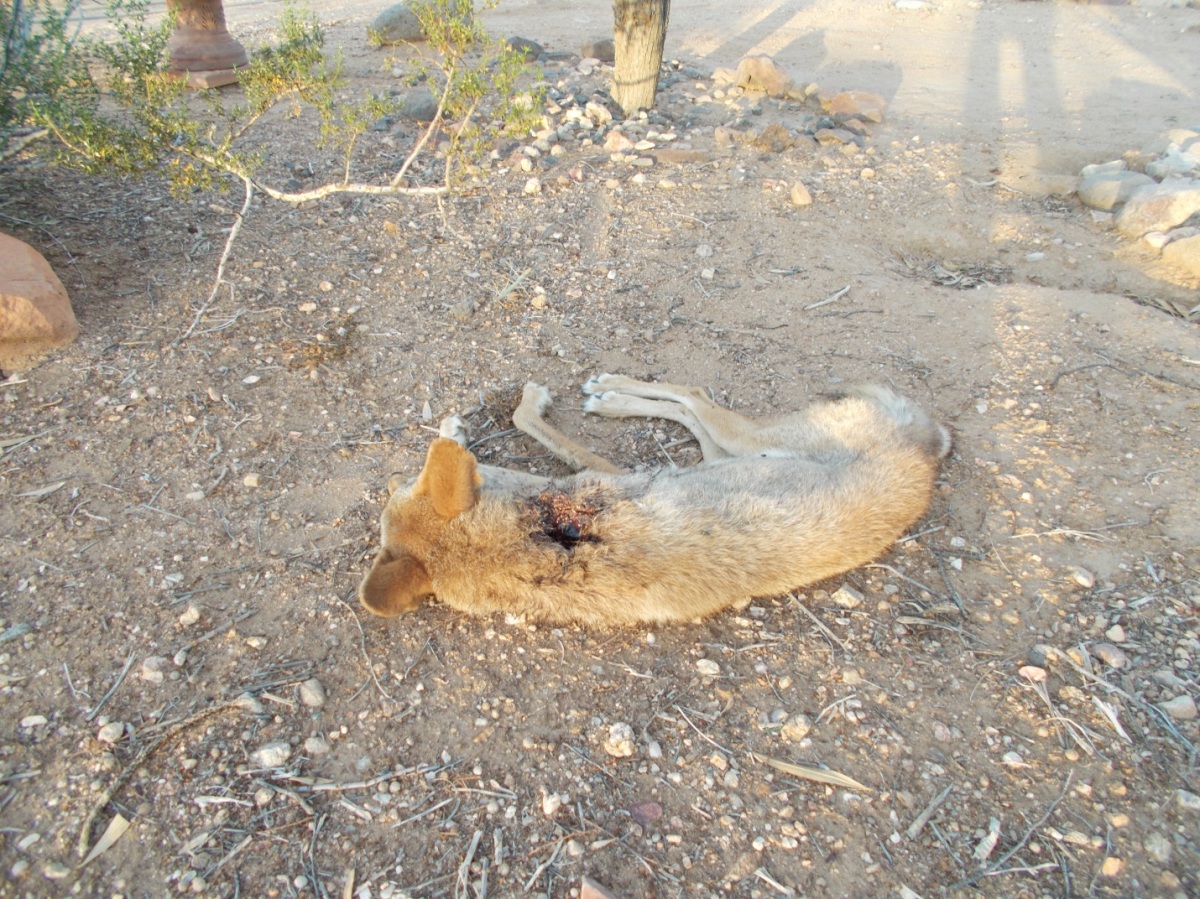 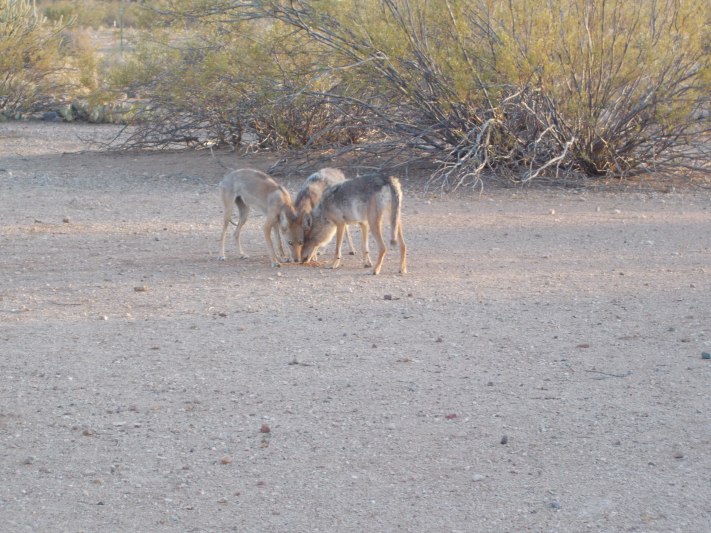 A Beautiful Friendship with God’s Creatures!

It made me cry a bit for the coyote too Dawn! Good how you and your husband put that effort and TLC into watching out for him and the others, with especially the tender mercy during his final hours!  I’ve rescued many wild creatures and have taken the required certification courses to do so properly!  Yea, I have a soft spot in my heart for all of God’s creatures but I have to admit the one I have the least tolerance for is, yup people! Now some fools talk about this bullying nonsense or one kid putting down another as if that is important but I say this!  Life is TOUGH, just look at the animal kingdom and see reality of life and death struggles moment to moment; and then people should wake up and get off their stupid soapboxes trying to look good and impress, as if they are fighting for a great cause, but that is all smoke and mirror bull shit; but instead creating snowflakes or future sheeple!  These ragging whining fools make me puke!  Many haven’t seen real life and death struggles enough obviously or got their channels mixed up to not be seeing what really needs tending to in this world!

That creep that blew the beautiful coyote away, is a punk low life in my eyes and nobody can change my mind on that, he killed an innocent animal creature that was doing no wrong for absolutely no purpose, other than and proving he is a sack of manure that can shoot and kill things for his own demented pleasure!  And I’m not at all into violence or anyone harming anyone or anything unless in self-defense but that guy needs his ass kicked bad, then maybe if he had to crawl around trying to get to the toilet or get to his fridge for some food to stuff in his face he could maybe get a glimpse of what a waste of life he is!  To me, he would best be a slug in the mud that is how much his existence means to me! Humans are too often the trash of the earth!

God bless you for making a difference in providing some nursing comfort to a simple creature that was trying to get through another Tough Day in this Cruel world that is infested with too many of the cruelest so called humans that are far from any humanity!

I include a couple of links here relating to animals; in some beneficial way I hope something in these words touches you and others.

First few not good stories at all and is similar to what happened to your coyote!

That was a great job you and your husband did with your coyote friend!!!

A Husky called Hope was found in a dump dying, loads of buckshot in her!

I HEAR the CALL of The WILD

The Murder of a Giraffe in South Africa

Where does that creature belong

ALL PHOTOS BY DAWN PISTURINO.

My first experience with coyotes was two eyes glowing in the dark, watching me from the sagebrush. People told me lurid tales of coyotes snatching little children, eating family pets, and circling around people who were out hiking in the desert. So, naturally, I developed a fear of them when we moved to Arizona from California in 1987.

Over the years, coyotes have roamed freely on our five acres of desert land, especially when we started putting out food and water for the birds. Some days, it felt like Grand Central Station, with coyotes coming and going. I never felt comfortable with this, but I also didn’t want to fence our land off all the way around. We keep the land cleared around our house, but otherwise, we leave the land in its natural state. We like watching the birds, rabbits, and other critters. We maintain our land as a wildlife sanctuary.

In 2017, an older coyote began hanging around, and I would go out and talk to him and leave dry dog food out for him. He was clearly tired and worn out and became a regular visitor. I worried about the other wildlife, but he never tried to harm a rabbit or a bird or anything else. In fact, on Christmas Eve, I saw him lying down in the back yard, like a dog, enjoying the sunshine, with birds and rabbits milling around him, and never bothered any of them. I remembered that Bible verse (Isaiah 11:6) about the wolf dwelling with the lamb. It was a beautiful thing to observe in real life and a wonderful Christmas gift. I was truly amazed.

In the summer of 2018, we experienced a severe drought in Northern Arizona. Even in Flagstaff, where I was working at the time, pine trees turned brown, the normally green meadows looked brown and dry, and wildfires threatened the whole area. For the first time, the campgrounds prohibited campfires — something long overdue. Around Williams, there seemed to be a constant wreath of smoke as the U.S. Forestry Service conducted scheduled burns.

The coyotes looked horrible! They were skin and bones and struggling to survive. My husband and I agreed to put dry dog food out for them whenever they showed up. The number visiting had already shrunk over the years, and we wanted them to live.

One day, the old coyote was carrying something black in his mouth, and I chased him around the yard, trying to figure out what it was. I was praying it wasn’t one of our wildlife. It turned out to be an old, dried up watermelon rind. That’s how hungry these coyotes were!

He started showing up around 5 pm every day, and that became our routine for dinner. One afternoon, I was sitting on the front porch waiting for him to show up. A truck driving down the road suddenly stopped, and I heard a gunshot. I figured the driver had killed a rattlesnake, but a chill ran through me when I thought about the coyote. I prayed it wasn’t him! The driver smiled and waved at me as he drove by as if he had just done me a big favor. The coyote never showed up for dinner, but I also didn’t see anything lying in the road.

The next day, my husband and I were walking down in the wash and kept seeing strange circular markings in the sand. I thought maybe kids were playing there. Then I found strange markings in our yard. I couldn’t tell if they were big-ass snake trails or if the dog had been running around with his leash on. But it really bothered me. And that night, the dogs kept barking.

At 5:30 the next morning, my husband woke me up and told me there was an injured coyote in our yard. I ran outside, and there he was — my coyote! He was lying in the dirt with a big gash in his right shoulder. I got as close as I could so I could look at the wound, but he lifted his head and bared his teeth at me. So I snuck up from behind and looked, and yes, it was a very deep gash. He had been shot, and even though the wound looked clean, it was very deep. My poor coyote was dying.

It was very hot outside, so I put food and water next to him. As the sun got higher and brighter, he moved to another spot. I moved the food and water with him. He raised his head and looked at me with such a look of gratitude in his eyes, I will never forget it. If we didn’t bond before, we certainly did at that moment.

My husband told me, “He’s going to end up under the front porch. Just watch.”

I didn’t think so because he kept moving farther away from the house and into the bushes, where it was cooler. As I watched him, I figured out that the strange markings in the yard were caused by the coyote dragging his right front leg. Later, I found him lying under the car — and then, I found him under the front porch! My husband was right.

The next morning, my husband found the coyote’s dead body under his truck. I cried my eyes out. And I was so angry at that driver for shooting him! There was absolutely no reason to shoot him. I still cry when I think about it. And I figured out that the circular markings in the wash were caused by the coyote thrashing around in a circular motion in the sand because he was in so much pain. I found the same markings under my husband’s truck.

At the same time, I felt honored and grateful that this poor creature – that was so injured and in so much pain – had made his way to our house for help. He knew he would be taken care of here.

Since then, we have other coyotes who come for breakfast and dinner:

Welcoming new baby coyotes into our life gives me hope that the local population will survive.