As reported on AOL.

This entire Leftist Sham Kangaroo Court Proceeding is a pack of the filthiest lies and concocted bull shit this nation has seen since the Trump Witch Hunts from day one of his presidency, in which Adam Schiff the epitome of a white color criminal, fabricated evidence, imaginary whistleblowers and fake narratives to lockup President Trump! These evil Leftists and Nazis in our government are not stopping their attempt to seize total control and power over this nation’s government system!

I find it hard to believe that this maniac leftist woman is a judge and can meter out sentences that effect lives this way! This obviously leftist freak administration which twists truth and facts to fit the “agenda justice” of the present Democrat Leftist Communist Marxist Cabal, Marxism a political ideology of which one of its main promulgators Karl Marx was a Satan worshiping devil of a human being, who even told and caused his own two daughters to commit suicide!  Now this lunatic judge is a part of the Radical Left Marxist’s ceasing of power in America; proved by this leftist judge’s sentencing a mother to prison for bringing her teenage child to a rally/protest, which was absolutely no armed insurrection, but was only Patriots of American Democracy exercising their Constitutional Rights to Protest!  Because they knew the election like any sane citizen knows had been mired with criminality and fraud, to steal the election from the people!  But this judge now takes this mother away from the child to push the agenda of Biden and Pelosi with the cabal, like a Nazi; which the Biden administration is a Nazi Gestapo Regime, and by this judge doing this exponentially worse act to this child and this mother, causing great irreparable harm, absolutely makes this judge a heinous criminal in a judges robe; who herself belongs and should be in prison! This is an atrocity and complete miscarriage of justice and heads should roll; but if Rule of Law and Justice do not Prevail; then I know for this judge and all the cabal behind her, mark my words, there will be hell to pay by God Almighty; who is sending the Winds of Truth and Justice to earth soon!

This judge is a biased Partisan Witch Freemason from her Georgetown affiliations and is nothing to do with Catholics or Christianity!  Get the picture! Evil Personified! 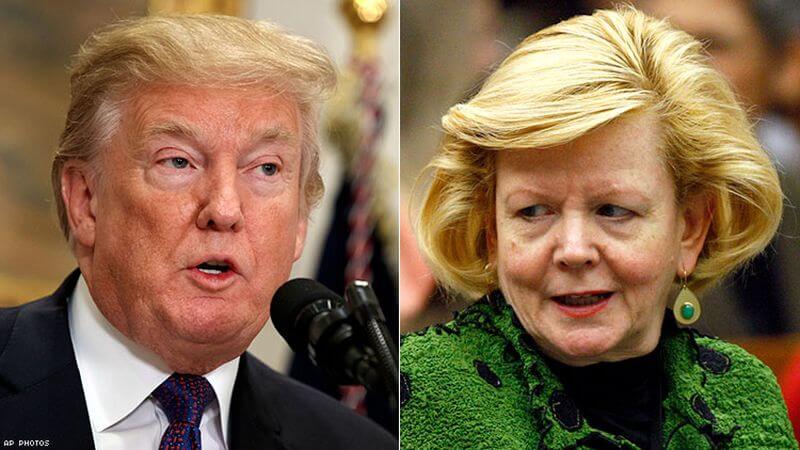 God bless all of the January 6th rally/protest attendees who are being persecuted for Love of Country, Freedom and the Lord above! May all those doing this harm to America and its good Patriotic Citizens; burn in hell!

Follow the AOL link at the end to watch the video and see what fringe leftist freaks they have testifying, who just like AOC lie profusely. The one I show in the photo reminds me of the Judge Kavanaugh Hit Job Hearing when the flaky Blasey Ford rape accuser, who was in the outer limits of madness tried to give Justice Kavanaugh the shaft! This nut job woman looks down at her prepared script to tell her story!  Evil liars!

Mom who took her child into Capitol during riot gets prison

A North Carolina woman who brought her 14-year-old son into the U.S. Capitol during last year’s riot was sentenced Friday to three months imprisonment.

U.S. District Judge Colleen Kollar-Kotelly said she finds it “very hard to comprehend” why Virginia Marie Spencer and her husband took their child into the building during a violent insurrection. Spencer’s husband, Christopher Raphael Spencer, also was arrested. He has pleaded not guilty to riot-related charges.

“It must have been a traumatic experience to witness this kind of violence,” the judge said. “It’s a complete lack of judgment on your part.”

Spencer must report to prison to begin serving her 90-day sentence by Feb. 25. The judge also sentenced her to three years of probation.

Spencer and her husband pressed forward toward the Capitol building with their 14-year-old son “in tow” despite seeing police shooting tear gas on the crowd, a federal prosecutor wrote in a court filing. The Spencers joined other rioters who overwhelmed a line of police officers, invaded House Speaker Nancy Pelosi’s office suite and demanded entry to the House chamber, the filing says.

Virginia Spencer pleaded guilty in September to parading, demonstrating or picketing in a Capitol building, a misdemeanor punishable by a maximum of 6 months imprisonment.

More than 700 people have been charged with federal crimes related to the Jan. 6 attack on the Capitol. Over 170 of them have pleaded guilty, mostly to misdemeanor charges. Spencer was at least the 75th riot defendant to be sentenced.

Spencer, a mother of five from Pilot Mountain who works as a restaurant cashier, was arrested in Durham, North Carolina, in February.

On Jan. 6, 2021, the Spencers and their son walked to the Capitol behind a group of members of the far-right Proud Boys. The couple briefly stopped to scream profanities at a counter-protester, according to prosecutors.

Inside the Capitol, Christopher Spencer filmed a Facebook Live video as he and his wife briefly entered Pelosi’s office suite, prosecutors said.

“Of note, Speaker Pelosi had staff members who were trapped inside that suite as the rioters called for Speaker Pelosi steps away from them,” a prosecutor wrote.

Virginia Spencer later joined a group of rioters who were chanting “Stop the steal!” and “Break it down!” outside the House Chamber door, although prosecutors say she wasn’t vocal or at the front of that crowd.

The Spencers spent more than 30 minutes inside the Capitol before leaving.

Spencer’s lawyer says she “ate up” media coverage of protests that erupted across the country in the summer of 2020 after a white police officer killed a black man, George Floyd, in Minneapolis.

“After months of watching our major cities burn, many people became convinced that vocal displays of outrage in the form of protesting was the only way to make their voices heard,” Orenberg wrote in a court filing.

Spencer also believed Donald Trump’s lie that the 2020 presidential election was stolen from him, her attorney said.

“Mrs. Spencer did not come to Washington, D.C., with the intention of subverting democracy,” Orenberg wrote. She came “to peacefully protest what she believed at that time to be a fraudulent election.”

A prosecutor said Virginia Spencer “felt she was embarking on a noble endeavor as a representative of the citizenry.”

“She could not have been more wrong,” the prosecutor wrote.