“Do not judge a dog by its fur, little one. I know all about waiting. Patience is one of the greatest virtues to possess. People all over the world remember me for my remarkable loyalty. Every day for nine years, from 1926 to 1935, I continuously waited for my owner Hidesaburō Ueno, outside a railway station, waiting for him to return from work like he did every day. Back then, I did not know that he had passed away at work and could never return to meet me again,” said the majestic canine smiling at the little pug.”

I know this story and I bet that because dogs are the kind of souls they are meant to be; what God intended them to be, as in the expression that people use, Man’s Best Friend, that there are many such stories like this!  Actually countless such stories, but, how many such stories are there about human beings that are expressive of such unceasing loyalty and love; granted there are some but the divorce statistics alone spell out what kind of lot we humans are, and let alone that we have Wars and Kill each other senselessly and spitefully for all manner of insane selfish reasons, just as Cain Killed his own brother Abel as told in Holy Scriptures!

Yes so you may know I have a big problem with people, but, not animals in general and especially not any such difficulty with my “Best Friends the Dogs!”

Here from Wikipedia is the basic fact of the matter of Hachikō waited for his owner at the rail station to come home from work for 9 years each day after this owner had died! I call that love, a love that not too many humans can produce in a lifetime of taking! 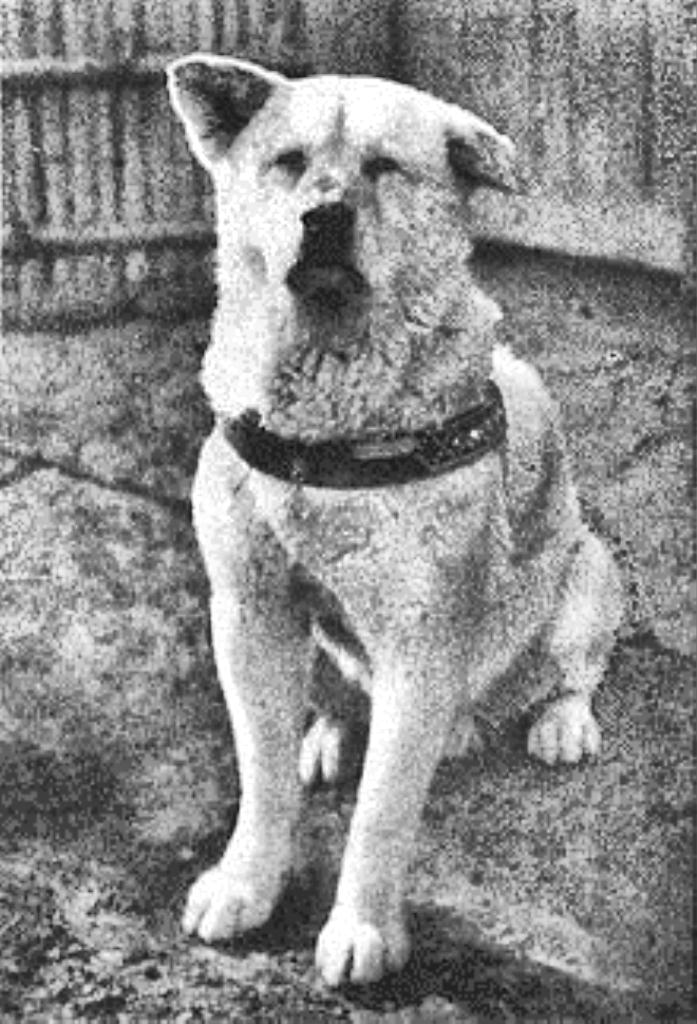 “Hachikō (ハチ公, 10 November 1923 – 8 March 1935) was a Japanese Akita dog remembered for his remarkable loyalty to his owner, Hidesaburō Ueno, for whom he continued to wait for over nine years following Ueno’s death.[2]

Hachikō was born on November 10, 1923, at a farm near the city of Ōdate, Akita Prefecture.[3] In 1924, Hidesaburō Ueno, a professor at the Tokyo Imperial University, brought him to live in Shibuya, Tokyo, as his pet. Hachikō would meet Ueno at Shibuya Station every day after his commute home. This continued until May 21, 1925, when Ueno died of a cerebral hemorrhage while at work. From then until his death on March 8, 1935, Hachikō would return to Shibuya Station every day to await Ueno’s return.

During his lifetime, the dog was held up in Japanese culture as an example of loyalty and fidelity. Well after his death, he continues to be remembered in worldwide popular culture, with statues, movies, books, and appearances in various media. Hachikō is known in Japanese as chūken Hachikō (忠犬ハチ公) “faithful dog Hachikō”, hachi meaning “eight” and -kō which originates as a suffix once used for ancient Chinese dukes; thus, Hachikō could be roughly translated as either “Mr. Eight” or “Sir Eight”.[4]
https://en.wikipedia.org/wiki/Hachik%C5%8D

Here is what I had to say in another posting about dogs today!

What an awesome Pooch! Never met a dog I didn’t like or that didn’t take to me immediately, I kid you not; now people that is a way different story, go figure!

Then again there ain’t much to figure, more people that not are too damned selfish or self-serving, but, the “Man’s Best Friend” only wants to serve and be loved! People are too complicated and not worth it; I’ll take the doggies over them human Mutts to keep my stress level down anytime!

By a God Send the dog I have now the last of 5 that I had all at once for a short time all rescues, until one passed and then another over time until just me and this last of my best buds is here with, yours truly!

She was one that was blessed by a God Send, also as the others were, but in her case for me to hear some howling at a shelter nearby where I had been earlier in the day hooking up a trailer to semi-tractor!  Just by that howl it was like a news flash told me to check that out later in the day when I finished with work, which I did!  And so this best friend I have now who was scheduled to be terminated as an unadoptable dog; even by an animal behaviorist, the very next day before the shelter opened would be dead!  But she is now many years later here on earth with me; because she got a rescinded kill order which was never done at the shelter!  The decision to euthanize is a multiple sign-off that people would need to be bothered after hours which is unheard of, especially a high raking police department official who has the final say and must approve this never done before reversal before 6 am the following day and it was already after work hours!  But because the woman knew me over some years and how I picked up dogs off the street that were in harm’s way or trouble; she did what I asked, to please try as hard as you can, and so, when I told her make it happen I will be here first thing in the morning to take this dog home she knew I wasn’t the weakest link in any act of clemency for the dog!

Here is the story as it went down.

TELL ME; WHO ARE THE REAL FREAKS!
https://lawrencemorra.com/2019/03/18/a-god-sent-ray-of-hope-and-light-on-thanksgiving-for-a-dog-and-a-man/

God bless all the dogs locked in some kennel with no human being out of all the selfish ones that are out there that won’t give them a chance because those people have better things to do living like gluttons!

Keep the ego trips people; I’ll take the dogs over most of ya anyway!

Brother to people and best Friend to Dogs,

Hatchu opened his eyes and found himself in a mesmerising meadow of greens. The constant pain in his hind limbs was no more there. Neither was there the nagging agony in his kidneys. He slowly lifted his right leg just a little bit to mark his territory. He was scared, that like every time, there would be blood and torment, but was delighted to relieve his bladder without a single clot or any anguish. He wondered, what was this place though? The most beautiful farmland that he had ever seen, dotted with tall trees swaying in the gentle breeze and a spellbinding rainbow far away on the horizon at the end of a hypnotic field?

The little Pug dog who had always thought himself to be a mighty Mastiff felt an uncanny urge to run towards the arched spectrum far away in the sky. He felt like an insect drawn…

8 thoughts on “Over The Rainbow Bridge”