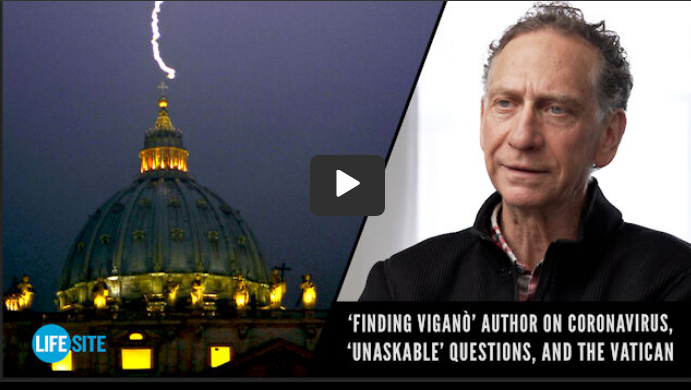 Perfect ladies, this is what I’m talking about! Justice and Truth in the Church are necessary and I dare say in society are equally important! This is an excellent interview that opens eyes and some doors to finding the truth!

An intentional subversion of many basic tenets of the Catholic Church or for that matter Christendom; even that the mystical resurrection of Jesus Christ had been quelled by Jesuits to have secularist belief systems take its place as what is valuable for society as a whole and even the individual! So basically saying the resurrection doesn’t matter or is defunct! Then I guess materialism is the “begin all and end all!”

This sure sounds like a big push toward communism and ultimately atheism, where man is god; is where things are headed! Robert Moynihan speaks very candidly and I like how he points out how so many voices have remained silent about all the corruption in the Church because of how convoluted and entwined the business of the Church is with the secular governmental systems these days in many places throughout the world; so there is such great risk now to come right out and expose too much, out of fear of multiple repercussions.

Thank God we have at least some great individuals like Archbishop Viganò or Cdl. Burke and others that can talk as candidly as need be! Mr. Moynihan does the same shedding some very important firsthand factual insights on what’s been going on with this push toward NWO and the general turning to secularism! Mainly science or some men of it want to “reinvent the wheel” where in this case the wheel is mankind! As I call them the madmen of the world think they can do better than God Almighty, and they don’t put their hope or faith in Him but instead in themselves to accomplish the impossible and perhaps resurrect self; or at least extend human life for hundreds and even thousands of years! Then as I understand it people would not go into eternity but instead would live in time for a long time! How boring and dead-end is that; these Dr. Frankenstein’s have “flipped their wigs!”

I leave this link to a short article that just came over the News Wire!  Talk about a sudden revelation about secularism having power over the Church or many of its hierarchy; just as I clicked post this came in about Biden!  Thank you Lord Jesus and Father in heaven!  What have I been saying in most of my blogs about that man!  Lord have mercy!  Folks please watch the interview!

Thanks to LifeSiteNews for this insightful interview with Vatican reporter Dr Robert Moynihan:

Thanks to LifeSiteNews for this insightful interview with Vatican reporter Dr Robert Moynihan: